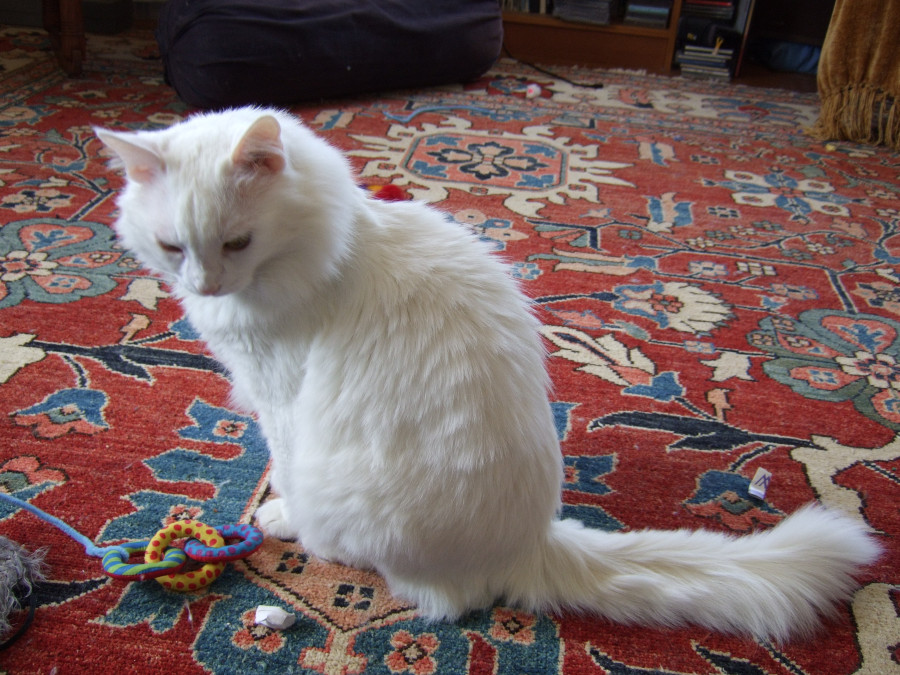 Beautiful, my delight,
Pass, as we pass the wave.
Pass, as the mottled night
Leaves what it cannot save,
Scattering dark and bright . . .

(Louise Bogan, "To Be Sung on the Water")

I took a two hour walk on Ocean Beach last night.  The opportunity was right, with the new moon's very low tide and the last  late twilight before daylight savings.  Today, it's pouring rain, so I'm glad I went out.   Low tide at sunset is my favorite beach time:  I always walk as far toward the ocean as possible, right along the edge of the water line, and then run like a kid toward the safety of the beach if a wave forces me back.

As usual, the few additional people out on the beach so late were with their dogs, and all the dogs had a grand old time chasing balls, the waves, and each other.  Strangely, at the bottom of the cliffs below Fort Funston, a steam shovel was digging up heaps of wet sand beside one of the drainage tunnels.  I couldn't imagine how the thing had gotten there:  certainly not directly down the steep cliffs.  Where would it go at high tide?  And why was it working so frantically at 7:30 on a Saturday night?  Perhaps to repair the drains before the rains hit?  Regardless, it made an odd contrast to all of the dogs running up and down the beach--especially when a chihuahua, dragging a leash and wrapped in a bright orange jacket, stopped short and began barking at it, as if commanding it to stop.  The owners called, but the dog ignored them.  So the owners sent their other dog, a borzoi mix, to take care of business.  The borzoi strolled over, picked up the leash in its mouth, and led the still-yapping chihuahua away authoritatively enough that I almost expected the steam shovel to follow, too.

The semester is kicking my ass:  no time to read or write or walk on the beach since September.  So now I'm trying to reverse that, with the beach walk for starters.  All I have left to (re)gain is my sanity.

In this post-911 era of fear-fueled flights, hyper-surveillance of passengers, and prohibited items in luggage, it's interesting to see what, exactly, the airlines do allow people to transport on commercial flights.  Perusing United's list of acceptable oversized items (including the usual suspects such as musical instruments, golf clubs, pet kennels, and sports equipment), I discovered that passengers are allowed to check antlers:

"One set of antlers or animal horns per ticketed customer will be allowed as checked baggage.  Antlers must be as free of residue as possible. . . . The animal's skull must be wrapped and antler tips properly protected."

I suppose the airlines can get away with this because, well, just how often do people transport antlers, anyway?  Which, of course, leads me to imagine a flight where every passenger arrives with a set (each rack just shy of the maximum dimensions allowed) .

Anyone want to join me?  We could all stand in the baggage line and sing a wicked revamp of that old Navy number:  "Antlers aweigh, my friends, antlers aweigh"!

Readercon!  Oh, how I wish that I could have spent more than one day there--and had the brain capacity to absorb even a teaspoon full of all the free flowing genre wit and wisdom in every room.  Eight hours at Readercon were like a hyper dose of caffeine.  I'm already massively overstimulated after five weeks at Odyssey, and Readercon felt like a wonderful reward and recreation for all the hard work I've been putting into thinking about writing and reading here in NH.   But, in my sleep-deprived state, Readercon felt overwhelming: there was so much to do and think about:  the panels on quantuum physics, time travel, tales of great editing, the GOH interview with Charles Stross--along with new people to meet.  How I wish that I had the attention span and energy to give to the experience!

Here's my list of books read for 2009.  The list doesn't include poems and short stories, which also constitute my reading diet, or all of those New Yorker articles I gobbled:( Collapse )

Some of the books on the list are old favorites:  comfort food that helped nourish me through illness; others are new fare (asterisked books are the rereads).  The Martin books are a combo:  I had read the first one back in the '90s, and then didn't get to the rest as they were published (despite the temptation) because my job was so grueling and I knew they'd involve a major time commitment:  in the sense that, when I'm reading a superb (and superbly addictive) fantasy novel, I can't do much else--I'm gone.  I'm glad to have saved them until now:  inhabiting that kind of epic world helped carry me through September and October, when I could do little else but read.

Brian Selznick's The Invention of Hugo Cabret I bought as a Christmas present for my niece, but I was compelled to read it myself before wrapping it.  What a seamless fusion of writing and drawing!  The drawings are deployed narratively, but not like in a comic, since Selznick never includes any dialogue bubbles, but interpolates the drawings at major plot points, such as moments of discovery (when he uses the device of incremental close-ups to great effect) or chase scenes.  I loved how the book centers on technological magic--the movies of Georges Méliès and the clockwork automata--yet showcases drawings that are so emphatically done by hand.  Even so, the texturing effects that Selznick gains from using pencil on watercolor paper don't simply serve as a contrast to the film and automata technology that the book celebrates, but suggest the craft involved in the technology, and especially the emotional commitment that Méliès and the boy protagonist, Hugo, devote to their endeavors.  The conjunction of "handmade" with technological marvels is underscored at a key moment in the plot, when the automaton draws a picture of the man-in-the-moon still from Méliès's A Trip to the Moon (and Selznick also includes a photo of the still later in the narrative).  Even while it stands as a satisfying story for young adults, the book engages with so many science fiction categories:  not only alternate history, but in exploding the cliché that machines, or things created by means of technology, are somehow cold and inhuman.  There's so much to learn from this book about fitting together written word and drawings, about overcoming the boundaries between genres.  The book seems to owe a debt to Steven Millhauser, who has written so many wonderful stories about automata and their obsessed inventors.  And Selznick has developed a marvelous website to explore: http://www.theinventionofhugocabret.com/index.htm

I'm also grateful to have discovered the work of Graham Joyce, whose novels feature supernatural elements, yet are just as squarely centered on the genuine strangeness of human experience:  for him, the supernatural is never mere decoration, but is inseparable from the characters' psychological growth--from their humanity.  Thus, for Sam, in The Tooth Fairy, or Fern in The Limits of Enchantment, the unreal (uncanny?) permeates their lives so thoroughly and convincingly that it could be a matter of projection:  their inner lives are so strange and fully realized, yet Joyce is so skilled at conveying the peculiarity of their daily lives, that the boundaries between the real and unreal are fluid.  This permeability gives Joyce the chance to apply what the characters learn from their often wrenching experiences with the supernatural to the challenge of how to live ordinary life, as in the following excerpt, which seems an appropriate meditation for the New Year.  Narrator Fern describes her experience of "Asking":  a Wiccan analogue to a Native American vision quest, which she has feared to pursue, in part because she has some doubts about "the old ways," as practiced with true devotion by Mammy, her adopted mother, the village crone/wise woman:
And I came to my senses again still leaning against the five-bar gate, watching tiny red spider mites crawling in the lichen green splits in the chrome grey wood.  And a voice that was my own but that sounded like Mammy in tone said move girl, you should move if you're not going to get stuck here.  Because that was the problem.  Getting stuck.
Mammy had said that was always the problem when Asking, getting stuck.  You could gaze at a thing, like a stream of water or a mite crawling in a split on a gate-post, and it would carry off your soul and you were left, hollow, empty, not even present.  And Mammy would say it's not just Asking that does this:  it's life, and you can also get stuck and go to sleep in a corner of your life and then wake up seven or seventy years later and it was all gone.  She said how you could blink during one of your school days and you blinked again and your own children were at school and you'd somehow got stuck and how we should never allow that to happen because we were too disposed to letting a life go by unheeded.  And now, on this day, and under these lights, I knew exactly what she meant, and I said move girl, you've got to move.            (162)
Given the sensitivity he shows in his books to time passing, and to the urgency of experiencing all of the compounded weirdness of life--of being aware of the details, while not getting lost in them--I wasn't surprised to discover him remarking on his blog that the Sandy Denny song, "Who Knows Where the Time Goes," has become iconic for him and his family: www.grahamjoyce.net/